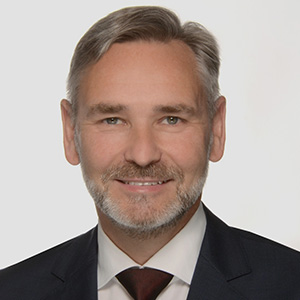 Axel Jester has been with the WM Group since June 2019 and is responsible for European Sales, Partnerships, LEI, European Documents Hub and SRD Hub.

He is involved as a venture partner in various start-up companies and combines their innovations with requirements of established companies.

Axel was Managing Director of Thomson Reuters (TR) since 2010 with overall responsibility for the Europe East region based in Frankfurt until his departure in June 2017. He was a member of the Board of TR Markets SA in Switzerland and Chairman of the Management Board of TR in Germany. In 2004 he started his career at Reuters in the Frankfurt office as Head of Account Management in Germany and Austria and moved to Zurich in 2006 as Head of Account Management Germany and Switzerland and Managing Director Switzerland.

Axel began his career at IBM in 1988 and, after holding various sales and management positions, moved to JP Morgan Securities Ltd in 2001 as Global Client Executive, where he worked as Vice President and Global TelcoMediaTech Equities Sales Specialist in the Frankfurt and London offices.

Axel holds a degree in business administration, specializing in information technology, and completed an executive curriculum at Harvard University in 2000.

This site uses cookies. By continuing to browse the site, you are agreeing to our use of cookies.

We may request cookies to be set on your device. We use cookies to let us know when you visit our websites, how you interact with us, to enrich your user experience, and to customize your relationship with our website.

Click on the different category headings to find out more. You can also change some of your preferences. Note that blocking some types of cookies may impact your experience on our websites and the services we are able to offer.

These cookies are strictly necessary to provide you with services available through our website and to use some of its features.

Because these cookies are strictly necessary to deliver the website, refuseing them will have impact how our site functions. You always can block or delete cookies by changing your browser settings and force blocking all cookies on this website. But this will always prompt you to accept/refuse cookies when revisiting our site.

We fully respect if you want to refuse cookies but to avoid asking you again and again kindly allow us to store a cookie for that. You are free to opt out any time or opt in for other cookies to get a better experience. If you refuse cookies we will remove all set cookies in our domain.

We provide you with a list of stored cookies on your computer in our domain so you can check what we stored. Due to security reasons we are not able to show or modify cookies from other domains. You can check these in your browser security settings.

We also use different external services like Google Webfonts, Google Maps, and external Video providers. Since these providers may collect personal data like your IP address we allow you to block them here. Please be aware that this might heavily reduce the functionality and appearance of our site. Changes will take effect once you reload the page.